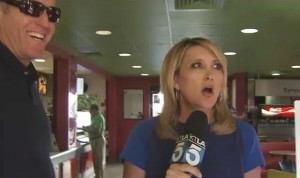 Nothing screams Media Disaster louder than the old “hand over the camera lens” routine. It is a regrettable, counterproductive technique popularized by shady politicians, overzealous –and under-experienced– PR reps, and now, a McDonald’s store manager.

And what was the camera crew’s transgression? Were they uncovering the secret ingredients of the Secret Sauce? Exposing what really goes into the McRib?

Nope. They were conducting the softest of softball live shots, regarding the restaurant’s new policy of offering breakfast all day.

Miscommunication at the Drive-Through

We shouldn’t be too tough on the manager. If she wasn’t aware the crew was coming, it is possible the KTLA assignment desk never cleared the shoot with McDonald’s (or perhaps the owner of that particular franchise). Seems unlikely, but not inconceivable. If that was the case, the manager was probably instructed to disallow the shoot. And, presumably never having had media training, she extricated the crew using the only technique she could think of; the one she had seen on lots of bad TV dramas. But in doing so, she only made herself and her employer look bad.

“McDonald’s cares deeply about being a good partner to the communities we serve and to members of the media. During a busy and exciting morning launching All Day Breakfast, a restaurant manager was surprised at an unexpected but appreciated live segment recording and unfortunately reacted in a manner not reflective of McDonald’s appreciation of the ongoing support from our friends and partners at KTLA.” – Clay Paschen III, president, McDonald’s Operators’ Association of Southern California

Camera crews can stand on the street and interview every person walking into and out of your restaurant (or gun store, or hospital), whether you like it or not. But they can’t do so inside unless they have permission. Of course, there’s a huge difference between a crew that sneaks inside to expose dirty laundry, and one whose story does nothing but promote your business.

And this is where good judgment comes in. Aggressive reporters should be firmly instructed to contact somebody in authority before they are allowed to shoot. Morning show camera crews doing puffy live shots brimming with PR value should be told the same thing; after the live shot is over.

And the only person who ever touches a camera lens should be a photographer.