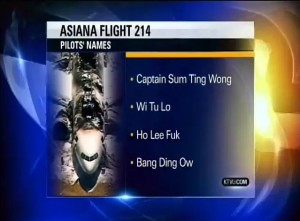 What do you get when you combine a tragic plane crash, a tasteless prank, and a summer intern with too much responsibility? You get a Media Disaster.

By now, you may have seen the cringe-worthy video of San Francisco station KTVU reciting blatantly fake names purported to be those of the pilots of ill-fated Asiana flight 214.

What you may not know is that it wasn’t the station’s fault. At least, not entirely.

Believe it or not, KTVU wasn’t kidding when they said the NTSB had confirmed those names. The agency released an apologetic statement shortly after the broadcast, saying in part: “Earlier today, in response to an inquiry from a media outlet, a summer intern acted outside the scope of his authority when he erroneously confirmed the names of the flight crew on the aircraft.”

It’s still not clear whether the intern actually provided the fake names, or merely confirmed them. What is clear is that a prominent government agency investigating an international news event allowed a summer intern to interface directly with the media (and indirectly, the rest of us).

This won’t look good on his resume

It should go without saying, but media communications –particularly during crisis– should never be left to trainees. Not only did this PR debacle turn a deadly accident into an adolescent joke, it also jeopardized the mutual trust essential between externally facing organizations and the reporters who carry their messages.

Always make sure your media communicators are trained, competent, and preferably, out of college.

Getting it first, getting it wrong

To be sure, KTVU should have known better, even in the face of “confirmation” by the NTSB intern. But in the race to beat the competition –including social media– it should surprise nobody that the station ran with it.

And by doing so, they set the stage for a phenomenally embarrassing Media Disaster.