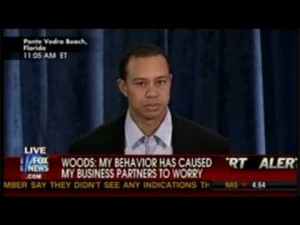 But did it do him any good? Is there anything he could have said or done that would have?

The fact is, Woods made so many media mistakes from the moment his personal life began to unravel, that today’s 14 minute statement (it is inaccurate to call his one-way presentation a “news conference”) merely gave his story new “legs”; a much appreciated excuse for reporters to keep the Woods infidelity saga alive.

Why a Master AND a Disaster?

The fact is, much of the content of Woods’ presentation was strategically sound. He took full responsibility for his mistakes, apologized emphatically, and vowed to continue working on his personal demons. Had he taken this message to the media immediately after the scandal broke instead of posting a curt message on his website and then disappearing, we might be dealing with an unequivocal Media Master. But because his comments were too little too late, his message was compromised. (We’ll go over this concept, among many others, at my upcoming Saturday Seminer. Apologies for the shameless plug).

It wasn’t enough that Woods refused to answer reporter questions today, or that he sequestered most of the media in a remote ballroom and forced them to watch his statement on closed-circuit TV. He actually attacked the media, lashing out at them for their admittedly aggressive tactics in trying to cover the story. But it was Tiger’s own behavior, both in creating the scandal and in (not) reacting to it, that prompted reporters to go on the hunt. What kind of treatment does he expect from the media now?

What Was the Point?

Consider this: Woods did not announce a date when he would return to golf. He did not say whether he and his wife were staying together. He did not proclaim that he had completed rehab and was now a new man. All he really offered was an apology and a tirade about the media. The former should have been done a long time ago. The latter shouldn’t have been done at all.