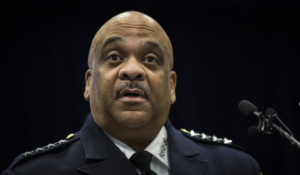 Much has been written about the bizarre, ugly spectacle of actor Jussie Smollett, and the allegation that he staged his own racist attack in Chicago. Critics have been asking, justifiably, if certain public figures were too willing to buy into Smollett’s story in spite of some rather dubious elements.

But something else emerged from the story that isn’t getting as much coverage; the poignant and passionate presentation made by Chicago Police Superintendent Eddie Johnson in reaction to the case.

If you want to see how to move the needle at a news conference, watch the five minute clip below.

“I just wish that the families of gun violence got this much attention.”

Surprisingly, Johnson started his news conference with a message that had nothing to do with the Smollett case, and instead referenced Chicago’s more pressing crisis of gun violence. Knowing he had the nation’s attention and a horde of journalists crowding his station, Johnson took advantage of the exposure. Smart. The remark’s power was in its brevity, and Johnson quickly shifted gears to the Smollett case. Also smart.

“I come to you not only as the superintendent of the Chicago Police Department, but also as a black man…”

If the allegations against Smollett are true, we all have a right to be angry, but nobody more so than members of the minority communities targeted in Smollett’s story. African Americans and members of the LGBTQ community don’t need an actor making real hate crimes harder to believe.

Johnson’s self-identification as a black man made his position that much more compelling. Personal experience can be incredibly effective in media messaging. This is why we counsel doctors to explain how it feels to cure the sick, and we train athletes to describe what it’s like to sprint over a finish line as the crowd roars.

By the time Johnson transitioned to the facts of the case, his opening remarks had created a powerful context; one that some in the room might otherwise have appreciated less.

Smollett may be the professional actor, but Superintendent Johnson’s performance at the podium makes him the Media Master.