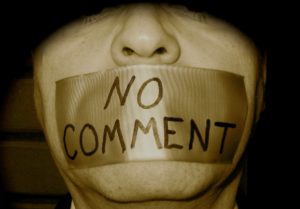 Do you know the secret code word reporters use when they call you, to signify that you’re being quoted? Read on and I’ll tell you.

The subject came to mind after a client sent me a USA Today article entitled Retail Giants Enable Trucker Exploitation. The article includes serious allegations of labor abuse involving several major US brands. Not surprisingly, many of those brands chose not to participate in the story, apparently concluding that the PR risks outweighed any potential benefits.

What grabbed my client’s attention -and mine- was the fact that emails from PR representatives declining to participate were actually quoted in the story.

Along with the clip, my client included this note:

“…Is this the “new normal” now for journalists to call out PR people who are simply just doing their jobs? If so, I expect they will see a lot more emails going unanswered because we will be too paranoid to even ask a simple question like “what other companies will be featured in the story?” for fear of being called out (BY NAME) in USA Today.”

Anything you say to a reporter could be used in his/her story, unless you explicitly state that the information is off the record (and you already know you should never go off the record).

If you suspect a particular reporter will use your email as content, you have a few choices: offer a short statement that summarizes the company position, or send a brief, innocuous, courteous rejection (The Nike and Costco statements above aren’t exactly scandalous, but the LG statement probably says too much). Don’t write anything that would embarrass you or compromise your interests if it ended up in the story. Ignoring the inquiry is a third option and last resort.

And don’t think you’re any safer when a reporter gets you on the phone. That code word they use to let you know you may be quoted?