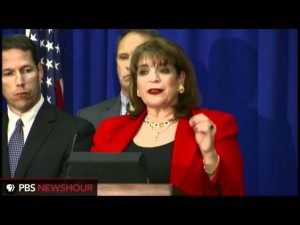 It can’t be easy stepping into the middle of the most culturally divisive criminal case in recent U.S. history. But Florida State Attorney Angela Corey changed the trajectory of the case -and the story- when she announced second degree murder charges against George Zimmerman in the death of 17-year-old Trayvon Martin.

And the fact that she did so with equal parts assertivenes, control, and compassion is a testament to her professionalism as well as her media skills.

Some in Corey’s position would simply have announced the charges, thanked their colleagues, and opened it up for questions. But not this prosecutor. Using proactive messaging and classic bridging techniques, Corey reinforced her key themes: Justice is the priority, for Trayvon and for Zimmerman…The case has been investigated meticulously and according to Florida law…Trayvon’s parents are the surviving victims. These and other messages emerged early and remained consistent throughout the presentation.

Know What to Say, and What You Can’t Say

It isn’t surprising that a seasoned law enforcement official would be careful not to release details of a pre-trial criminal case. Still, it was impressive to watch Corey respectfully yet firmly bat away some of the most pressing reporter questions. What was the specific evidence that led to the charges? Where is Zimmerman being held now? What did he say when he was arrested? Valid reporter questions all, but Corey was prepared not to answer them while the case is pending. Note that even when rebuffing reporters, she often did so with a smile on her face. It was a look that seemed to communicate warmth and sincerity as opposed to irreverence or smugness.

If there’s one thing the Trayvon Martin incident has been crying out for, it is someone in a position of authority to step up and reassure both sides that answers will come. And while a long road lies ahead, Corey’s calm and purposeful presentation from the podium suggests that, at the very least, someone is in charge.

We don’t yet know whether she will prevail in her prosecution of George Zimmerman. But winning a court case -even one this notorious- is not a prerequisite for being a Media Master.