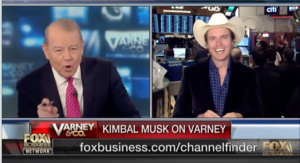 I realize that when you check this blog you expect pithy observations on the media and tips to make your interviews more effective. But I must repeat:

If you’re confused or annoyed by the fact that I hijacked my own blog to carry on about an obscure horticultural holiday, then you understand how Fox Business host Stuart Varney must have felt when he brought Elon Musk’s eccentric brother Kimbal on his show, ostensively to chat about new leadership at Tesla.

A Grenade in the Garden

The first rule of media training is come up with a message and stick to it. That’s how effective media campaigns grow. What we have here is a clear case of overwatering.

Varney, undeniably cranky, quite rightly pointed out that his business audience isn’t the ideal target for the Plant a Seed Day message. Musk’s obnoxious promotion of the event was ill-conceived in the first place. It seems clear he consented to the interview under false pretenses. Then, by ignoring Varney’s reasonable questions about Tesla, and simply repeating the same sentence over and over, he further alienated his interviewer and–more important–his audience.

Perhaps you’re thinking that any publicity is good publicity, and the fact that I’m sharing this video with you proves Musk’s stunt was a success. It all depends on what Musk ultimately wants from the media. Fox Business will think long and hard before allowing him back on the air, even when the Tesla board has non seed-related information to share. Other media outlets will take note, too.

And consider this: Varney would undoubtedly have permitted a plug for Musk’s passion project if Musk had introduced the idea as a “by the way” at the end of a more professional interview. It wouldn’t have been as entertaining that way, but it also wouldn’t have burned any media bridges. And it would have been easier to take Musk –and his holiday– seriously.

Speaking of holidays, I wish you the very best this season, and a very happy new year.