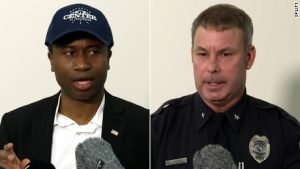 Police departments, city leaders, and public companies must be able to communicate with the media, and also with the public at large. But doing both at the same time can be a terrible idea.

Take what’s been happening in Brooklyn Center, MN, in the wake of the tragic police shooting of Daunte Wright.

In their haste to be transparent with a justifiably furious community, the mayor and (now former) police chief allowed both the media and local residents to attend indoor news conferences describing the details of the shooting and aftermath.

If you have time to watch the video below, you will notice what happens when the voices of the community begin to drown out the questions of journalists.

To be clear, I’m not arguing that the police shouldn’t take questions from the public. One could argue that these questions are even more important than questions from the media. But town hall forums and city council meetings are for communites, and news conferences are for reporters. Here’s why:

Journalists seek answers and facts. Residents and activists are often looking to make statements. No matter how just their causes may be, passionate citizens shouting accusations may inhibit communicators from being forthcoming. That hurts everyone.

If a news conference is particularly disorganized, it may be hard for communicators to know the difference between reporters and members of the community. If an “open” news conference becomes hostile, reporters may be unfairly blamed.

Fielding reporter questions and community concerns at the same time makes for lengthy, redundant news conferences (see video above). Reporters may miss deadlines, delaying the time it takes for important information to reach everyone else.

Of course, it isn’t always possible to segregate the public from journalists, especially in the line-blurring age of social media. And at public outdoor locations, it may not even be legal.