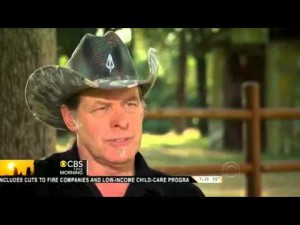 Full disclosure: When I heard Rocker-turned-activist-turned-media freakshow Ted Nugent was going to appear on CBS This Morning, I put a note in my calendar to review the clip, so certain was I that I would find fodder for a new edition of “Media’s Masters and Disasters.”

Nugent exploded in response to a simple premise posed by the reporter; that the “Motor City Madman” may be insufficiently moderate to help Mitt Romney in the general election.

A Messaging Opportunity Bleeped Away

I know what you’re thinking: One doesn’t need media training –or a media training newsletter for that matter– to understand that assaulting journalists with sexually oriented threats/insults in the middle of an interview is generally considered bad form. You may also be thinking, “So what? Everybody knows Nugent is a loose canon and he says what he feels. It’s not like he’s a politician.”

Hunting Field Mice with a Bazooka

Was Nugent’s firepower really necessary in response to a very simple –and easily anticipated– question about his political beliefs? The diatribe about dying children had absolutely nothing to do with being politically moderate. There are any number of ways Nugent could have addressed that question without losing his temper (perhaps simply by reminding the reporter that he is not an official spokesman for any candidate, or by pointing out that Romney needs support from those on the far right, too).

A Gift to CBS

CBS This Morning is justifiably being touted as the smarter, “newsy” network morning show. And perhaps because of that, it has struggled in the ratings. Did the producers expect fireworks from a man whose previous statements about the president have earned him attention from the Secret Service? You bet they did. The internet will ensure that CBS This Morning gets credit for that interview for all eternity. Which is exactly how long Ted Nugent may be known as a Media Disaster.