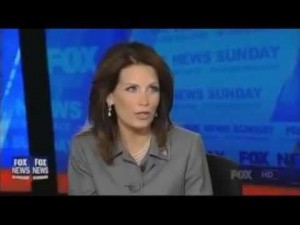 Given her recent track record, it may be surprising to see the words “Michele Bachmann” and “Media Master” together on the same subject line. But the gaffe-prone Minnesota Congresswoman’s handling of a surprisingly provocative interview with Fox’s Chris Wallace proved she is capable of holding her own.

The admirable performance came in response to a very simple question from Wallace; “Are you a flake?”

Bachmann accurately described the flake question as “insulting.” Insulting questions don’t require direct answers. If she had taken the question literally, Bachmann would have joined the unfortunate ranks of Richard “I Am Not a Crook” Nixon and Christine “I’m Not a Witch” O’Donnell.

Bachmann may have been on a slow burn as soon as she heard the question, but she didn’t let it show. Experienced -or well trained- media communicators know that losing one’s temper is the easiest way to create an even bigger story. Arguing, insulting the reporter, or taking off a mic and walking off the set will always ensure that your interview is remembered for your behavior, rather than your messages.

By far the most impressive aspect of Bachmann’s response was her use of specific examples. Reporters cannot do their job without a healthy skeptical streak. When you punctuate your points with statistics and/or examples you appeal to their rational sensibilities. Bachmann might simply have stopped after she labeled the question insulting. By immediately following that up with a long list of her personal and professional accomplishments, she provided a way for us to question the “flake” label.

Wallace has since apologized for his line of questioning. But it won’t be the last time Bachmann faces tough interviews now that she is officially running for president. Campaign success will depend, in large part, on whether she remains a Media Master.