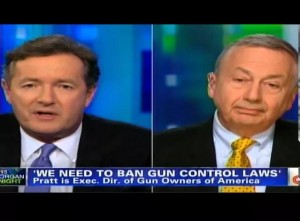 Let’s begin with a disclaimer that I would hope isn’t necessary. This blog deals with media strategy, not ideology.

And though the tragedy in Newtown may make it hard to separate the two, I want to reiterate that my analysis of any given media performance is not a judgment on the the interviewee’s position.

So, with that out of the way: Did you see Piers Morgan call his guest “incredibly stupid” and an “idiot” on live TV?

It happened during a segment with Larry Pratt, Executive Director of Gun Owners of America. The clip is 10 minutes long, but worth every minute if you can spare the time.

One of the first videos I show clients in any media training session is a clip from Fox News, where an overzealous anchor grills his guest over a controversial corporate policy. Inevitably, I get this question: When is it OK to stand up and walk out of an interview? The answer is almost never. But when an anchor resorts to calling you names, insulting you personally, we’re getting close to that threshold. Pratt calmly responded, staying on message instead of taking the bait. And that is to his credit. Because Morgan was the only one losing his temper, it felt as though he was losing the argument, too. (Pratt’s derogatory reference to Morgan’s British heritage was regrettable. He was so close to the end!)

When Morgan quizzed Pratt on the number of gun deaths every year in the UK, Morgan clearly suspected (as did many viewers, no doubt) that he would stump his guest and compromise his credibility. But Pratt disarmed Morgan by immediately reciting the statistics. Clearly, this is a number that has come up in gun control debates before.

I’m not the only one writing about Piers Morgan’s interview today. By resorting to name calling, Morgan bought himself something increasingly precious in today’s cable news landscape: attention. But curious readers and web surfers who Google this interview will find something more than sensationalism. Thanks to Mr. Pratt, they will also find a calmly delivered, carefully articulated message from the gun lobby. Staying on message –rather than firing back– makes Pratt a Media Master.