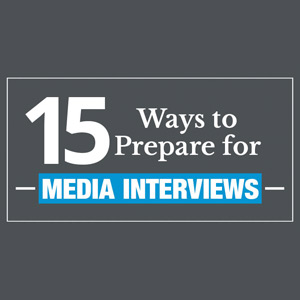 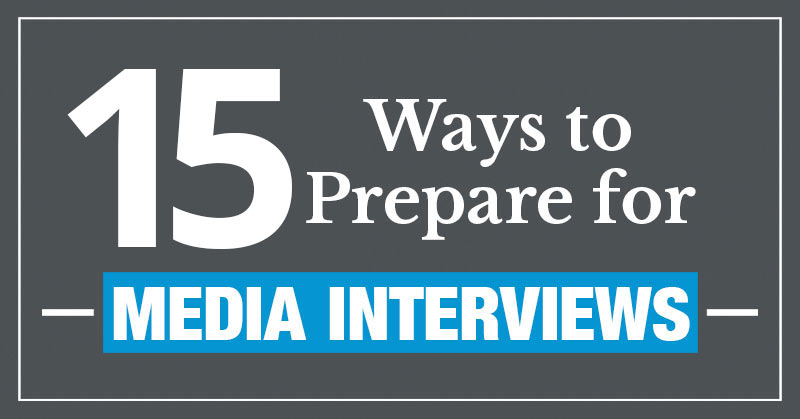 For nearly every business, public relations and marketing are essential ingredients in the recipe for success. Most business owners understand this point and make all efforts to maximize their company’s media exposure.

But contrary to the old adage, not all publicity is good publicity. Some interviews are a waste of time. And some cause more harm than good.

Furthermore, getting media coverage is one thing; making use of it is another entirely.

Here are some of the best ways to make sure you’re getting the most out of your media interviews.

Listeners, readers, and viewers expect more than hollow corporate messaging; They want to hear proof points. Company profits, industry numbers, stats on the market outlook; they want to see the objective backup for your messages.

Whenever you’re going into an interview, a significant part of your focus should be the audience that you’re an authority on the subject in question. Studying the numbers so you can cite them confidently will go a long way toward doing just that.

2. Keep Calm, or at Least Look That Way

You may not be able to totally eliminate nervousness during an interview, but the pros learn to prevent it from showing. Breathing exercises, practice, and lots of preparation will provide the confidence necessary to control your interview.

Giving the appearance of comfort and confidence is crucial, if you don’t seem to believe in yourself, why should anyone else?

Make eye contact with your interviewer, keep still, and smile where appropriate (even if you don’t feel like it).. This may not come quickly to you. That’s okay; most people are scared of anything resembling public speaking. Take the time to practice and get into the right frame of mind.

As a business owner, your attention may be divided in countless directions during the average day. But when the time comes to conduct an interview, you need every ounce of your attention focused on the task at hand. Everything else belongs on the back burner.

That means leaving cell phones and all your other concerns in the office–or at the very least outside the interview room. Common office distractions can disrupt your train of thought and throw the whole conversation off kilter.

Go over any upcoming media appearances again and again. Practice, practice, and practice some more until your messaging is comfortably memorized. When the actual interview arrives, you don’t want to have to think on your feet. Instead, do that thinking ahead of time.

Get a clear picture of how you want the interview to go and establish a manageable pace. Without a general outline to follow, you can veer off course; practicing ahead of time reduces the chances of flying off the rails.

5. Stay in Control of Your Own Interview

Interviewers are masters of sensing the perfect moment to lob questions designed to provoke the most newsworthy answers they can. While they’re not always antagonistic, it’s still the job of an interviewer to dig up information that will interest their audiences–and that can mean sniffing for drama.

Occasionally, these questions can catch interviewees off-guard. Some people react by embellishing, speaking off the cuff, and guessing at answers they don’t actually have. This can cost credibility, and worse, may encourage an astute reporter to become more aggressive. Always remember; a reporter is looking for a story, regardless of whether that story helps or hurts your own interests.

Be honest, and don’t be afraid to ask the interviewer to repeat or elaborate on a question. Sometimes a reporter is perfectly happy with a respectful and relevant response, even if it isn’t actually a direct answer.

This is your story; make sure you’re in control of the narrative.

It’s a good idea to create, memorize, and practice  three key messages to push during the interview. These messages should be positive and impactful, the kind that will reach the audience and resonate

In the age of lightning-fast technology and shrinking attention spans, you can’t expect most people to focus on any one topic for hours–or even minutes.

To make sure as much helpful data and dialogue as possible gets through to anyone watching, reading, or listening to your interview, it’s vital to keep your answers brief. Try squeezing your answers into no more than twelve seconds per response.

Business interviews are all about precision. It’s a whole lot easier to say too much than it is to say too little. And if you say too much, you are inviting the reporter to edit you. In a worst case scenario, your words may be taken out of context.

Take steps to be as precise as possible. Don’t waste a second; don’t say a word that doesn’t need to be told to address the immediate question.

If you want to maximize views, listens, clicks, impressions, and word-of-mouth promotion, you have to strike while the iron is hot.

Have a plan in place to share an interview right after you publish it. That means your business’s social media page (along with any employees’ accounts) should like, retweet, and share the specified interview as soon and as much as possible.

This will increase the likelihood of outsiders liking and sharing the interview, expanding its sphere of influence. Hundreds, thousands, or even millions of additional eyes might be drawn in the right direction.

But first, you have to be ready when the time is right.

Professional journalists know that some of the best quotes come when interviewees feel the need to “fill the dead space.” While this is a natural inclination during ordinary conversation, it can be very dangerous during a news interview. Once you’ve stated your response, simply stop. Never continue talking merely because the reporter hasn’t asked you a follow-up question. If necessary, say to the reporter, “I hope I’ve answered your question.”

For consumer oriented interviews, your target audience should be envisioned as a fifth-grader. Avoid all jargon and acronyms, instead using relatively simple words when speaking. This doesn’t mean you have to oversimplify; it means you should speak clearly, using words that are commonly understood.

The exception to this rule pertains to trade interviews, where the audience may be technically sophisticated and already familiar with your subject matter.

You wouldn’t go on a blind date with somebody without Googling them first, so apply the same standards to an unfamiliar reporter. Find out as much as you can about his/her news outlet or blog, previous work, and in particular, any biases that may be evident in his/her background.  It’s perfectly okay to decline an interview if you are overly concerned that the reporter won’t give you a fair shake.

No matter how annoying or insulting a reporter’s questions may be, it is important to remember that it’s almost never personal. So don’t take it that way. There is nothing to be gained by losing your temper with a journalist, and plenty to be lost. Many a news story has sprouted legs and ran longer because the interviewee lost his/her temper. Keep your composure, and head to the gym when the interview is over.

It has been said that 60-80 percent of a message is conveyed not through words, but through non-verbal cues. Pay attention to your posture, your facial expressions, and the way you’re carrying yourself in general. Use your hands in a productive, natural manner. If standing, never put your hands in your pockets, or lock them behind or in front of you. Let them do what they would ordinarily do in a normal conversation. Note: You may find that the less you think about your hands, the more natural your body becomes.

From a media relations standpoint, there’s nothing more tragic than getting a chance to appear in a prominent news outlet and then wasting the opportunity because of a lack of skills.

Even if you’re an accomplished public speaker, there are some communication techniques that are truly unique to the media interview process. Media trainers do more than give you the do’s and don’ts; they help you practice in an environment where your mistakes don’t matter. That way you won’t make the same mistakes when everything’s on the line.