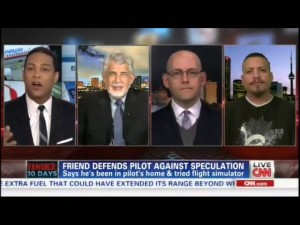 Did you know that, following the events of the past weekend, there may be a new war in Eastern Europe? Did you know that the grand healthcare experiment known as Obamacare reaches a critical milestone in two weeks? Did you even know that March Madness is about to get underway?

Please don’t be insulted by my questions. If CNN is your only source of news, you honestly may not know about any of those stories.

Longtime subscribers may recognize this post as a departure from the standard format featuring a newsmaker whose interview skills are noteworthy. This time it is the news media itself that warrants scrutiny, more specifically CNN for its decision to spend nearly all of the last 9 days (that’s 216 hours) on speculation over the disappearance of Malaysian Airlines Flight 370.

This sad spectacle reached a nadir when host Don Lemon debated with his panel the possibility that the missing plane had fallen victim to some kind of supernatural force. I’ll pause while you read that last sentence again.

What You Don’t Know Can Hurt You

As an interviewee, one of the most dangerous things you can do is speculate. When you don’t know, the best course of action is to admit it, or to talk about something you do know. CNN’s policy of turning every newscast into a speculation fest adds nothing to the conversation that we couldn’t get from those wacky Facebook friends who constantly post obscure Internet articles discredited by Snopes. Or, as Mediaite so aptly put it, “The press’ mandate is to debunk myths and rumors, not to feed them.”

Early into a media training session, we implore students to develop proof points, usually comprised of statistics or examples, that will support whatever message they are trying to communicate. The reason? Most serious reporters will require evidence in order to find your position credible. So how are we to find credible the hosts, anchors, and reporters of a network whose stock in trade this past week has been conjecture and dueling hypotheses?

To be fair, the trickle of information coming from various government agencies has been murky and at times contradictory. But there was a time when a news organization’s job was to sort out that information before presenting it to the public. Today, we aren’t just watching the sausage being made; we are watching the sausage contents being marched to the slaughterhouse.

I’m well aware that this type of saturation coverage, pioneered by CNN, has generated big viewership spikes in the past, and that is reportedly the case now. I’m not arguing that this type of programming is bad for the ratings.