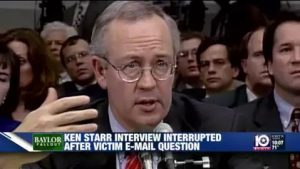 Media trainers and consultants pride themselves on helping their clients navigate the treacherous waters of crisis communications. How ironic when the PR specialist creates the crisis.

While it may seem politically incorrect to designate a fellow media trainer as a Media Disaster, it should be noted that the individual in this case, Merrie Spaeth, has reportedly acknowledged that she mishandled a TV interview featuring her client, former Baylor University President Ken Starr.

The trouble started when Starr got a question Spaeth didn’t like.

When the Media Trainer is the Story

Apparently, Spaeth was concerned that the email question might leave Starr open to some kind of trouble. And while her concern may have been well founded, the way in which she expressed it backfired. By insisting the crew edit out the question, interrupting the reporter, and hovering next to Starr throughout the process, Spaeth created distractions much more interesting than the interview itself. Oh, and there was a camera there.

With the exception of entertainment reporters, most journalists will never agree to make a particular interview topic off limits. If Starr and/or Spaeth didn’t want to address a simple question such as whether Starr remembers seeing a particular email, it might have been wiser not to grant the interview in the first place.

But once they did agree to the interview, Spaeth should have faded into the background. As much as clients might like to have their media trainers literally standing by their sides during news interviews, this approach is not advisable. If a client or boss can’t be trusted to face a reporter on his own, then he isn’t ready for news interviews.

This kind of media misstep is mercifully rare. It is much more common to see an interviewee’s attorney interrupting an interview than a communications specialist. But lawyers are paid to represent a client’s legal interests, not PR concerns. And even these attorneys would be well advised to stay out of the interview process as much as possible, interrupting only as the nuclear option.

As for media trainers and crisis consultants, they need to finish their work before the interview begins, lest they or their client become a Media Disaster.