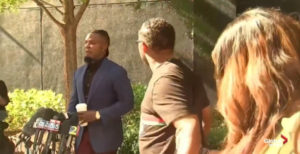 The last thing a high-profile-singer-turned-accused-sex-offender needs is a self-described crisis manager who only makes the crisis worse.

To be fair, it wouldn’t be easy for anyone to defend singer R. Kelly against the abhorrent allegations he faces; kidnapping, child pornography, and obstruction of justice to name a few. But spokesman Darrell Johnson’s Atlanta news conference needed its own crisis management as soon as it was crashed by the parents of one of Kelly’s alleged victims.

Johnson described himself as a “crisis manager,” though it was at times unclear as to whom, if anybody, was paying him. His message was muddled and confusing. Was he there to defend Kelly, to simply explain the status of the investigation (better left to the DA), or to express sympathy with Kelly’s alleged victims? By bouncing around on various themes, his purpose was obscured and his credibility weakened.

Johnson even bungled his reaction to the parents’ very understandable outrage –at once arguing with them, and then sounding conciliatory (“I would drive my truck into that hotel if my daughter was in there”).

On the other hand, those parents never should have been part of the news conference, because…

Crisis communications isn’t just about messaging, it’s about logistics. A timely response to crisis events is crucial, but so is the location where you decide to communicate. By selecting a very public outdoor venue for the news conference, Johnson had no way to limit the audience to legitimate media outlets. Why wasn’t this sensitive presentation delivered in a hotel conference room, or even the offices of Mr. Kelly’s attorneys?

The Messenger as Message

A client in trouble recently asked if I would become the face and voice of his company until the crisis passed. I pointed out that the word “crisis” is a loaded one, and that any reporter who Googled MediaWorks would immediately see the “C” word associated with me. So we hired a well established public relations communicator who had ample spokesperson experience in both crisis and non-crisis situations, while my team handled matters from behind the scenes. This deprived the media of being able to call my client’s spokesperson a “crisis manager.”

Mr. Kelly’s reputation is likely damaged beyond repair. It’s a shame when the same thing needlessly happens to a PR specialist; even one who proves to be a Media Disaster.