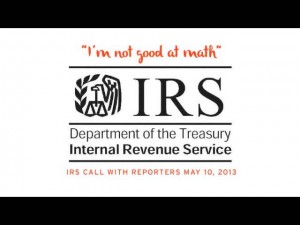 Sometimes it takes an entire interview to earn the status of Media Disaster. This time it took five words.

When the IRS held a conference call to answer questions about their treatment of conservative groups seeking tax exempt status, they presumably had one objective: to reassure the media–and the public–that their credibility and integrity remain in tact.

And so, it was more than a little disturbing to hear an official for the IRS–the agency charged with handling the taxes of every American–make the following mind boggling statement:

I’m not good at math.

What You Can’t See Can Hurt You

Doing interviews–or in this case, news conferences–over the phone can be very advantageous. For one thing, you can wear your bathrobe. For another, you can lay out your messages in front of you and literally check them off as you deliver them. Great liberties are afforded media communicators who don’t have to “face” reporters; but also great liabilities. Never forget: Every word is on the record, and every interview can wind up on the internet, speeding on the frantically flapping wings of social media.

Counsellor, You’re Out of Order

On the call, you may have heard a reporter challenge the IRS official’s claim that she’s “not good at math.” Her reply: “I’m a lawyer, not an accountant. Sorry!”
If only fixing this colossal blunder were so easy. It probably goes without saying, but if you are acting as an official spokesperson for the Internal Revenue Service, claiming you’re not good at math simply isn’t an option. It doesn’t matter whether you went to business school, law school, or traffic school.

It’s pretty clear the spokeswoman intended her reference as an aside, perhaps a joke. But when the subject matter is serious and reporters are listening, there’s no place for casual banter. The Obama administration is going to have their work cut out for them as they navigate the IRS crisis. And now that it has become a Media Disaster too, the fallout will be even worse.

How much worse? I can’t say. I’m not good at politics.