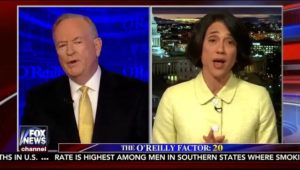 In this unbelievably contentious election season, it is probably wishful thinking to assume that I can deliver an edition of Media’s Masters and Disasters featuring controversy over Donald Trump, Bill O’Reilly, and the Fox News Channel without ruffling some reader feathers. But I shall try. The media lessons it references are just too important to ignore.

In actuality, the subject of this edition isn’t Trump or O’Reilly, but Washington Post blogger Jennifer Rubin, who appeared on The O’Reilly Factor to defend a column in which she had criticized O’Reilly for being too soft on Trump. But if she had intended to take O’Reilly to school, she might have done her own homework first.

I hope you watched the entire clip. If you did, 2:37 is probably about the time when you started feeling uncomfortable. That’s when Rubin begins fumbling through her notes, searching for examples of O’Reilly’s perceived transgressions. What’s significant here is what O’Reilly does, or more specifically, what he doesn’t do: He doesn’t stop her. He doesn’t interrupt her. He doesn’t change the subject. Instead, he lets her struggle on camera for nearly a full minute.

By the time O’Reilly finally accuses Rubin of being “ill-prepared for this interview,” even viewers who might not ordinarily agree with the Fox News icon may be inclined to see his point.

Rubin Vs. the Video

But O’Reilly doesn’t stop there. He rolls a montage featuring interview clips designed to refute Rubin’s accusations that O’Reilly is merely a Trump “parrot.” Selective editing though it may be, the video proves that O’Reilly did something Rubin did not; he carefully and thoroughly prepared for an interview that was certain to be contentious. Oh, and he had producers, writers, and editors to help him.

The point here is not that O’Reilly is right or that Rubin is wrong. It is simply that Rubin committed a mortal media communications sin; she allowed her interviewer to be better prepared than she was. Rubin may indeed have had compelling examples to back up her assertions. If so, it is a pity she couldn’t access them under duress.

Not Necessarily the News

What about Rubin’s fundamental complaint that O’Reilly is a “fake news person?” Perhaps she expects too much. Wikipedia’s entry on Bill O’Reilly lists him first and foremost as a “political commentator.” And he begins every show with an opinion piece called a “Talking Points Memo.” As for his network, suffice to say that having the word “News” in an outlet’s title does not in any way guarantee that you will be doing a news interview.

I’m not just singling out one network here. Fox News Channel may have pioneered the concept of “talk-radio-as-news,” but it has since been adopted by the other two cable news outlets with varying degrees of success.

Regardless of the outlet or the interviewer, effective media strategy starts with serious preparation. That means anticipating the questions you’ll get, assembling your messages in advance, and creating solid proof points to back them up. Failing to take these steps dramatically increases the likelihood of becoming a Media Disaster.