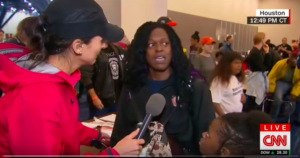 Reporters, as you know, have a job to do. A free press is an indispensable component of any democratic society. But for people in the midst of trauma and tragedy, reporters often represent nothing more than an insensitive intrusion.

Such was the case when a CNN reporter roaming a Hurricane Harvey evacuation shelter came across a young mother who wanted nothing to do with TV news (warning: explicit language, NSFW).

Whose Side Are You On?

It’s hard not to sympathize with the woman in the shelter. Perhaps you’ve made up your mind that you would have reacted exactly the same way.

But if we try to look at this objectively, was the reporter really the villain? If we can agree that gathering news from the frontline of an historic natural disaster is a worthy pursuit, then can we really blame the journalist for doing her job?

A Flood of Emotion

It appears from the clip that the woman was a willing participant as the interview started, but became irate as it progressed. Perhaps the reporter asked one too many questions. Or maybe the woman being interviewed had simply run out of energy and patience in the midst of a crisis most of us can only imagine. Who would blame her?

But one thing is certainly true: By exploding in exasperation, the woman unwittingly created a story, validating the presence of the same media she was berating. Her raw and totally unfiltered outburst speaks every bit as poignantly as all those pictures of elderly residents being rescued in fishing boats.

A journalist’s role doesn’t become less important when people are suffering, it becomes that much more important (ask the survivors of Hurricane Katrina). But reporters must be especially sensitive during these times. That means approaching cautiously, choosing interviewees carefully, and knowing when to back off.

And even when reporters follow all those rules, they can’t be surprised when they get an earful of profanity in the middle of a hurricane.