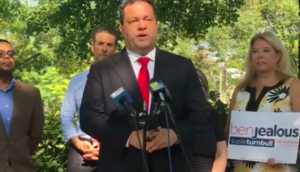 How Will You be Remembered?

During a week when politicians of every stripe waxed poetic with obituaries for John McCain, and McCain’s own goodbye letter reminded us of a more civil era that may have died with the senator, it was worth noting that there are other ways to make your communication memorable. Really, really bad ways.

Maryland Democratic gubernatorial candidate Ben Jealous found one of the worst ways. And his unexpected overreaction to a question about being a socialist ultimately forced him to apologize on Twitter. 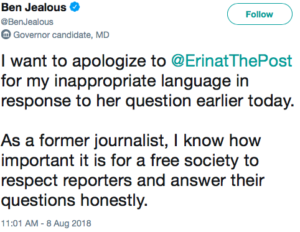 Of course, Jealous didn’t need to apologize to the media. He did them a tremendous favor. The candidate’s profane outburst, quasi-comical as it seemed, gave the reporters at that news conference something really interesting to write about, and it had nothing to do with the candidate’s platform. Because Jealous’s media strategy apparently allowed no accommodation for pesky, persistent, probing reporters (otherwise known simply as “reporters”), he exchanged respectability and decorum for a few seconds of catharsis. Reporters covering local politics live for moments like that.

But for Jealous, who is trailing Republican incumbent Larry Hogan, the incident was a needless distraction. While it’s true that some voters in 2018 gravitate toward politicians who “talk like the rest of us,” vulgarity is a tactic whose risks outweigh any potential benefits.

It is my hope that all of us; Democrats, Republicans, independents, and socialists, can agree.