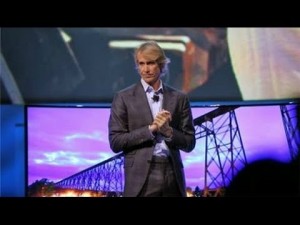 Action filmmaker Michael Bay has been responsible for some of the biggest explosions ever to hit the silver screen.  But instead of giving us fireworks at a Consumer Electronics Show presentation, Bay simply bombed.

He was there to unveil a new curved screen TV monitor for the media and other CES attendees. But when his teleprompter apparently malfunctioned, Bay pushed the panic button.

Needless to say,  Bay relied much too heavily on fallible technology.  There’s nothing wrong with using a Teleprompter for a presentation (as long as it’s necessary),  but that doesn’t absolve a speaker of his responsibility to become comfortable with his material.
I can’t pretend to know exactly what caused this peculiar down-spiral,  but it seems a reasonable assumption that if Bay had been more familiar with his script, he might have been able to ad lib his way through the rest of it, rather than aborting the whole presentation.

I’ve heard of escapism, but this is ridiculous

Bay made a smart decision in the beginning of the clip when he admitted he had been thrown off his game.  This kind of confession can help keep your audience supportive and your confidence level steady. Audiences want you to succeed! But in this case, Bay was unable to follow through. And so he chose the absolute worst solution; the nuclear option. He simply walked off stage.  And now this clip will burn up the Internet not because of the gee whiz technology it was supposed to introduce, but because of the bizarre and frankly unprofessional behavior of the presenter.

The clip begs an obvious question which no doubt has already crossed your mind: What should Bay have done instead of walking off?  The reality is that it never should have come to that point. If Bay was unable to commit his presentation to memory, and insufficiently confident in his ability to ad lib, then he should have had emergency cue cards in his pocket. Alternatively, he could have asked someone for a drink of water. Often the simple act of taking a sip can clear and reset the mind.  And if all else failed and he still felt the need to flee, he could have at the very least promised to gather his thoughts, address the technical bugs, and return momentarily. Instead, Bay left the audience and his own presentation partner hanging.

Technology is your servant, not your master

Modern technology has brought us some impressive ways of making a presentation more dynamic. But it’s far too tempting to let technology take over the presentation, relegating the speaker to a virtual afterthought.  I see this phenomenon time and time again, though it usually involves PowerPoint rather than a Teleprompter. That’s why I’ve devised a terrifying yet effective coaching technique for my presentation training clients:  In the middle of a presentation drill, I occasionally unplug the PowerPoint projector and inform the client “there’s just been a power outage.”  Those who are able to conclude their presentations without panic or desperation earn the title of Media (or Presentation) Master.