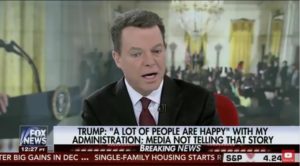 I’ll admit it. I was worried there for a while.

Like you, I watched Donald Trump rail against the media day after day, doing everything he could to denigrate reporters and dismiss legitimate journalism as “fake news.” And I began to wonder what impact all this would have on the media.

I have a vested interest: I spent 15 years in the media. I have friends who are still reporters. The media plays a crucial role in the PR objectives of my clients. Would President Trump succeed in eroding trust in traditional journalism? Even worse, would he actually convince the public that the media is their “enemy?”

Then something happened. The media started fighting back. Nowhere was this more apparent than when Shepard Smith of the Fox News Channel launched into a direct-to-camera counterpunch to the president in defense of a colleague at CNN.

This wasn’t the first time Smith, a relative centrist on the otherwise right-leaning Fox News Channel, has defended his profession from the president’s tirades. But it was probably his most impassioned presentation to date. And his colleague, Chris Wallace, was no less spirited when he tore into White House Chief of Staff Reince Priebus over the weekend.

Meanwhile, over at CNN, host Don Lemon cut an interview short when one of his guests dismissed a story about the taxpayer cost of protecting the first family as “fake news.”

There’s an old saying that goes, “Don’t pick a fight with a man who buys ink by the barrel.” Intentionally or not, the president has declared war on scores of “opponents” with all the ink, cameras, microphones, and bandwidth they need to fight this battle. And now they are uniting.

Yes, Trump’s base shares his disdain for the press, and supports him in his anti-media campaign (perhaps you do, too). But now that he’s president, Trump ultimately will need to reach more than just his supporters, who number in the minority.

Rather than deligitimizing the media and driving them to irrelevance, I now suspect the president’s actions will have the opposite effect. National news outlets are staffing up their Washington bureaus. The New York Times is seeing big gains in online subscriptions and advertising. And cable news ratings, which usually tank after an election, are soaring.

But the media must take –and keep– the high road as they work to prove the president wrong. That means extra vigilance to ensure accurate coverage, less attention paid to every (comparably) innocuous misspelling or misstatement, and no more sophomoric tweets making fun of POTUS, please (I’m looking at you, CNN).

In this era where journalism is transitioning from a profession to a hobby, we still need the pros in the game. They provide us with invaluable insights into our world and hold our leaders accountable.

And they absolutely, positively, are not the enemy.