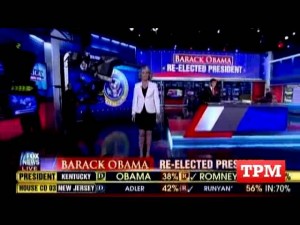 As a media trainer, I was closely watching the election night speeches of President Obama and Mitt Romney. But in those final hours, neither candidate earned the distinction of Media Master or Disaster. I had to turn elsewhere for such examples. And they were as easy to spot as tiny plastic American flags.

Some of the worst behavior came from the media themselves. So as we gratefully put Election Night 2012 behind us, here are a few examples, in no particular order:

When Ted Turner founded CNN, he wanted The News to be the star. Ted would be rolling over in his grave (if he weren’t still alive) to see the Harry Potter party tricks his old network now feels it must employ for every election. This time around we got live shots from a “virtual senate chambers” and a custom light job that turned the Empire State Building into Manhattan’s largest -and least necessary- election results tabulator. That sound you hear is the collective groan of all the fine journalists CNN has jettisoned over the years in the name of budget cuts.

Karl Rove vs. The Results

It was just before 11:30 PM when Karl Rove brought Fox News Channel’s election coverage to a screeching halt. The former Bush campaign strategist simply couldn’t believe the president had effectively re-won the Whitehouse. His insistence that it was too early to call Ohio not only contradicted every other network, but also contradicted the calculations of Fox’s own “Decision Desk”; a team of pollsters sequestered in their own hermetically sealed war room. Makes one wonder why the network would bother having a unit with that name. But it all made for great TV.

Donald Trump Ratchets Up the Trumpiness

What has happened to Donald Trump? He went from flamboyant Billionaire to pop culture cartoon character. And his latest antics have observers questioning everything from his relevance to his sanity. Trump sent out numerous Tweets last night calling for “revolution,” and at least one (below) which prematurely claimed Obama lost the popular vote. That one later disappeared from The Donald’s Twitter page.

Diane Sawyer: The Vote is Still Out

Was it the endless sleepless hours leading up to the election, the excitement of the long anticipated poll results, or some kind of premature celebration over the impending end of the election season? Only Diane Sawyer knows for sure. But whatever it was, it had viewers wondering, er, what it was. ABC attributed her slurring and giddy delivery to “exhaustion.” And then they ordered YouTube to remove unauthorized clips.

To be sure, the evening featured other Media Disasters, some of which may have been even worse than these. Compiling a complete list would take longer than election night itself. Nevertheless, if you spotted one that I missed, I’d love to see it.

And now, I’m going to get some sleep.