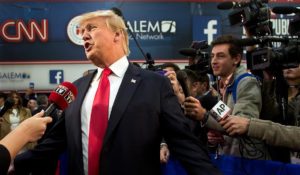 If you’ve undergone my media training, you’ve probably seen a clip I show featuring Stephen Colbert. It’s from his old cable show, The Colbert Report, and it features a real congressman making a series of tragic interview mistakes while Colbert, posing as a newsman, does his best to make those mistakes seem as funny as possible.That clip used to bring the house down, as the congressman walked into one trap after another. Sometimes I had to crank it up so that the volume would rise above the laughter in the room.But then something happened. Donald Trump ruined my clip.At some point last year, I began to notice the clip wasn’t eliciting the same reaction as it used to. The congressman’s mistakes were just as obvious, but they no longer seemed so outrageous. Eventually, my clients started asking me if I was going to use any Trump clips during my orientation. And then I understood. In the Donald Trump era, nothing from the world of satire would ever be as powerful as real life. Whether you believe Trump to be a media disaster who can only communicate 140 characters at a time, or a media master whose shrewd manipulation of the press helped him to win the White House, one thing is undeniable: He’s breaking a lot of tried and true media rules.And what’s to come? Will he marginalize –perhaps even shut out– the White House press corp? Will he continue to issue statements via Twitter instead of holding news conferences? And will his media messages, however they may be delivered, contain the same factual challenges that characterized many of his statements on the campaign trail? We, of course, have no control over any of that. But we can control our own actions, and we can influence those of our clients and bosses. With that in mind, I humbly propose the following new year’s resolutions:I’ll Tweet, But Also SpeakMake no mistake: communicating exclusively through social media is like coloring with a single crayon. No matter how much you try to say, you can only be so expressive. Twitter and Facebook are tremendous tools, but will never be an effective substitution for the candid, spontaneous engagement of a news interview.I’ll Be HonestYou needn’t tell a reporter all the truth, but everything you say must be true. Enough said.I Won’t Blame (or Threaten) the MessengerNo matter how much the media annoys or offends you, it’s important to remember that journalism is a job, and most reporters are just trying to do it. In the wake of the 2016 election, many respectable journalists say they are facing hostility, intimidation, and even threats of physical violence unlike anything they have experienced in the past. We don’t have to love journalists, but we should all fear a society where they aren’t free to confront, challenge, and provoke the people in power.I’ll Choose My News WiselyThe proliferation of fake news is a predictable byproduct of a social media universe that allows anybody to write anything and publish it anytime. It was bad enough when people started consuming only the news that confirmed their biases. Today, they not only read it, they write it and spread it, too. Don’t post “news” items from dubious sources. Call out your friends and relatives when they do it, even if you happen to like what they posted. Snopes has never been a more important journalistic tool than it is today.I think I’ll keep using that Colbert clip. It’s still funny, after all. And now, it reminds me of a quaint time in the recent past when eggregious media missteps were mostly relegated to cable comedy shows.