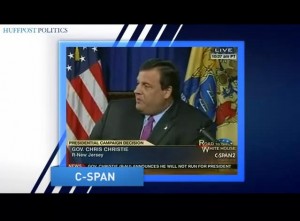 It was back in 2010 when New Jersey Governor Chris Christie suggested that only his suicide would convince the media –and perhaps his own supporters– that he really, truly, would not be seeking the presidency in 2012.

Today, the popular Republican is still very much alive, and we also know for certain that he won’t seek higher office in 2012, thanks to a lively news conference that underscored why many wanted him to run in the first place.

Whether the topic was his personal decision process, or David Letterman’s incessant fat jokes, Christie was candid, direct, and genuine throughout the nearly 1-hour news conference.

Once a Master, ONCE a Master.

I may get some emails on this one. Yes, I realize Christie’s brash tone hasn’t always gone over well. His habit of using curt statements and crude language in responding to his critics has in some cases created more of them. But his style was well suited to this particular news conference, which called for authenticity over scripting, and candor over cliches. Watch the entire video (above) if you have an hour to spare. Better yet, skip straight to the Q&A section which begins three minutes in.

A Newsworthy News Conference that Broke No Real News

Christie’s announcement was predicted. Once he admitted many months ago that he “wasn’t ready” to be president, it would have been tremendously difficult to convince skeptical voters otherwise. So Christie’s task was to end the speculation about his candidacy in a way that would satisfy his constituents (“You’re stuck with me” ), pacify his supporters, and keep the door open for 2016. Christie chose humor, self deprecation, and playful jabs at the local media to make his points. And they were more memorable (and quote worthy ) because of it.

His Suit Won’t Fit Everyone

It’s important to remember that just because a particular style seems well suited to a particular media communicator, that isn’t to say it will work for everyone. Those without a natural sense of humor should never begin a speech by telling a joke. And those who don’t have the plain spoken, street smart sensibilities (not to mention healthy ego strength) of Chris Christie probably shouldn’t address the media the way he does.

I have no idea whether Christie would have made a successful candidate or effective president. But I do know that his announcement that he wouldn’t run qualified him as a Media Master.