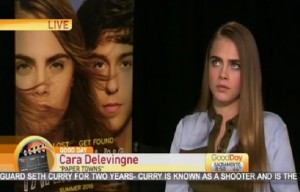 This edition of Media’s Masters and Disasters features a petulant interviewee showing great disdain for the media, and it is not Donald Trump. You’re welcome.

Instead I call your attention to a young English fashion model/singer/actress by the name of Cara Delevingne, whose shenanigan tolerance seemed to be running dangerously low during a satellite interview for Good Day Sacramento.

Provocation Prompts Pouting (Instead of Patience)

Before you blow up my inbox with emails defending the young artist and pointing out that she was provoked by the wacky morning news team, let me concede the latter right now. It is true, the female anchor mispronounced Delevingne’s name as “Carla” during the introduction (never a great way to get an interview started), and then asked her whether she had ever read the book on which her new movie is based (a potentially insulting question). But artists promoting their work shouldn’t go on local morning TV expecting Charlie Rose or PBS NewsHour. And as professionals, they need to enter the studio wearing thicker skins. That’s not to say that interviewees should allow themselves to be abused or attacked by the media, but that was hardly the case here.

Of all the interview formats we train our clients to handle, Satellite media tours are some of the toughest. The spokesperson (often a celebrity) is plopped down in a dark studio and must then essentially repeat the same 5-minute interview dozens of times for stations all over the country/world. The day often starts at 4:00 AM and goes through lunch. It isn’t easy to remain fresh, energized, and good-natured for your 14th interview. But remember: Delevingne is an actor. She doesn’t have to be happy about doing the interview or fielding silly anchor questions, all she has to do is perform. And, by the way, that goes for non-actors, too.

A celebrity client once let me in on his hilarious technique for enduring satellite media tours. I describe it on my Facebook page.

It Was a Good Day for “Good Day”

Delevingne is by no means the first celebrity to “lose it” on a satellite media tour. Whether Tony Danza or Joan Rivers (caution: F-bomb), it’s a story we’ve seen before. The new angle is the way anchors and reporters are responding. They’re losing their patience, too. Delevingne’s behavior essentially got her kicked off the air by hosts who also had to get up at 4:00 AM, and who recognize that an SMT is a symbioitc arrangement. Local TV stations get to interview big celebrities, and the celebrities get free airtime for their projects. Sometimes, allowing a famous interviewee to crash and burn makes a much better story than five minutes of sycophantic promotion. It also, unfortunately, creates a Media Disaster.