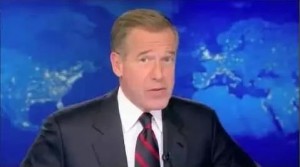 This one is going to hurt. Not because I’ve ever been a huge fan of NBC News anchor Brian Williams –I was never convinced he had the gravitas to fill Tom Brokaw’s shoes. And besides, I’m more of a Scott Pelley man. It’s just that my beloved former industry, the one that taught me everything I know about journalism and served as a boot camp for my career as a media trainer, the industry tragically known today as “legacy media,” cannot withstand too many more insults of the type that Mr. Williams has inflicted.

You’ve probably heard all about it by now. In 2003, Williams was onboard a Chinook helicopter in Iraq when a helicopter in front of his was hit by enemy fire. Trouble is, over the years his story morphed into one that put him in the center of the action.

Williams was forced to recant the revised version of his story after military personnel refuted it.

Williams has cited the “fog of memory” as the reason for his changing story. Perhaps he merely conflated elements over the years. After all, his initial version of the tale was more accurate: a helicopter in front of his own was the one hit by the RPG. Or perhaps Williams lied in a self-aggrandizing attempt to pad his journalistic resume. At the end of the day, it doesn’t matter much because either explanation damages Williams’ integrity as a reporter. Credibility is the lifeblood of journalism. And now, the nation’s top-rated network news anchor is hemorrhaging.

Traditional Media Takes a Hit (Unlike the Helicopter)

Defending network news has become a lonely pastime. Younger audiences have been seduced by junk-food headlines served 140 characters at a time. Meantime, there are cable channels and fringe “news” sites to accommodate and reinforce every political predisposition. But the network newscasts are one of the last bastions of traditional reporting. Scandals like this one (and make no mistake, it is a scandal) will only lend credence to cynics who believe that old fashioned journalism is just plain old fashioned.

I was a network correspondent once. And though I never reported from a war zone, I know exactly what would have happened to me if I had been assigned to one and had, like Williams, repeatedly reported a blatantly fabricated version of events. I would have been fired, and justifiably so. Reports suggest NBC currently has no plans to terminate, or even to discipline, Brian Williams. We’ll see if that decision sticks.

But even if he keeps his job, his viewers will never watch him the same way again. Or at least they probably shouldn’t. While it would be unfair to judge Brian Williams’ entire career based on one story, this kind of transgression is more than enough to qualify as a Media Disaster.