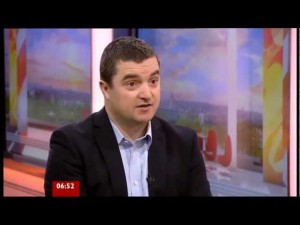 If there’s one thing the company that makes the Blackberry needs, it’s good PR.

Research in Motion has just released a new smartphone which they hope will help them recover some of the business they’ve lost to the likes of Apple and Android. Too bad the company’s European spokesman seems to be doing everything he can to attract headlines for all the wrong reasons.

Managing Director Stephen Bates appears to have developed his own perplexing technique for dealing with questions he doesn’t like: He just pretends he didn’t hear them.

Appearing on the BBC, Bates didn’t just ignore a question about RIM’s troubled past; he ignored it three times (starting roughly 2:00 in).

Lest you dismiss Bates’ unusual interview behavior as a rare or inadvertent misstep, listen to him ignore questions about the iPhone on a recent radio interview. Notice a pattern? It suggests that Bates has deliberately set out to conduct one of the most peculiar, not to mention counterproductive, corporate media campaigns in recent memory.

Don’t Jump Off the Bridge!

If you’ve had my media training, you have unquestionably been introduced to The Bridge, a simple and widely practiced technique for turning ugly questions into positive messages. The Bridge begins with an acknowledgment of the question (“It is true, we allowed others to make headway in a market we should have dominated”), followed by a connecting word or two (“but”), and then a positive message (“those days are behind us and we are so excited about the prospects for the BlackBerry 10.”). The first part of The Bridge, the acknowledgement, is non-negotiable. Mr. Bates illustrates quite effectively what happens when you skip it.

Some Publicity is Bad Publicity

There may be those who will claim that Bates is a genius; that his bizarre and disrespectful technique will at least draw attention to his interviews and his new BlackBerry. I am not one of those people. After all, if you forward this clip to friends or colleagues, I’m guessing you will not do so in order to share your excitement about the new BlackBerry. You’ll be passing it along as a clear example of a bona fide Media Disaster.