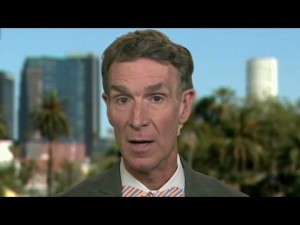 And now, a lesson in how to keep your cool during a discussion on global warming.

And while it is not an endorsement of any particular position in the climate change debate, it most certainly is an example of exempliray media skills on the part of the interviewee, TV scientist Bill Nye (“The Science Guy”).

One need not be an egomaniac to become offended when an anchor suggests your work is kooky, questions your credentials, and then challenges you to “defend yourself.” In fact, that unnecessarily provocative challenge could very understandably lead to a rather, er, defensive interview. But Nye was too smart for that. He knew that snapping at Costello would only give the interview notoriety for the wrong reasons. And what good would that do him or his position?

Blinding Her With Science?

Reporters tend to have a pretty high sales resistance. How else can they separate genuine news from self serving pitches? If you’ve taken my media training seminars, you know that the way to penetrate that veneer of skepticism is through the use of statistics and examples. Nye’s calm but potent presentation was replete with both. He didn’t just implore Costello (and her far more important viewing audience) to believe in global warming. He didn’t spout cliches. Instead, he offered a rational argument supported by proof points. One can argue the accuracy or implications of those proof points, but at least he had some.

It’s no secret that over the years cable news has shed journalists and shuttered bureaus in favor of the cheaper and more sensational “heads in a box” format, whereby “expert analysts” duke it out in front of the cameras. Traditionally, the loudest or most outrageous head is the one who gets the most attention. But Nye offers a counterexample. You need not agree with his position in order to admire his style. And if you are a global warming skeptic who calmly goes on TV with rational, compelling arguments accompanied by statistics and examples that seem to support your side, I’ll likely call you a Media Master, too.