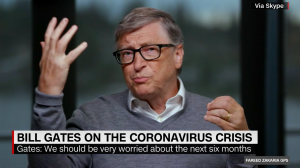 Well, I finally found it.

I turned on CNN over the weekend, and there, courtesy of Bill Gates, was a living, breathing example of somebody who actually uses his hands too much in an interview.

To understand why this is such a big deal, you need to know how rare it is. Here’s what I’ve learned about body language during my 20 years as a media coach:

1) Almost nobody uses their hands too much.
2) Most people believe they do.
3) Almost everybody who mistakenly believes they use too much body language blames it on their heritage. Apparently, no matter whether you are French, Italian, Jewish, Spanish, or Portuguese, that is the reason you speak with your hands.

But Bill Gates really does use his hands too much, and in a really distracting way.

Non-verbal communication can be just as important as words. For news interviews, your body language should be subtle but expressive. It should illustrate and support your messaging. But Gates uses his hands in grand, random, distracting motions that overshadow everything else. And when he’s not making these outsized gestures, he’s often fiddling with his wedding ring instead.

I’m guessing Gates is seated in a chair with armrests. And when he places his elbows on those armrests, his forearms have nowhere to go but up. This is one reason I discourage this type of chair. Without armrests, you’re more likely to use gestures purposefully, as needed, instead of just fidgeting. 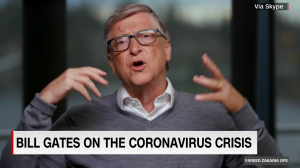 Please don’t misinterpret this post as a recommendation to lock down your hands and arms, using only your speech to communicate. Far more people make that mistake than the opposite one illustrated above. Body language is a good thing.

And Mr. Gates reminds us that too much of a good thing is possible.