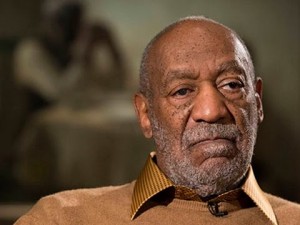 If you want a textbook case of how not to handle the media during a personal crisis, look no further than Bill Cosby.

Cosby’s supporters and detractors have been waiting for some kind of response from the comedian as the sexual assault allegations against him mount. When asked about the accusations during a recent NPR interview, Cosby simply shook his head silently–a curious strategy when one is being interviewed on, you know, the radio.

But now we learn that the NPR interview wasn’t the first time that Cosby has been presented with these allegations and refused to address them. The Associated Press interviewed Cosby earlier this month, and that interview made the NPR exchange look downright smooth by comparison. Watch:

The Cosby rape allegations have been all over the news. Some outlets (I’m looking at you, CNN) have been covering the story almost to the detriment of other world events. How could Cosby agree to any news interview without fully expecting questions about the accusations? If it is his intention to ignore all such questions, he would be well advised to avoid reporters for a while.

Interviewees Don’t Get to Edit

The most troubling part of the AP video actually comes after the interview is over, when Cosby attempts to browbeat the reporter into suppressing the part where the allegations come up. It is never a good strategy to try to pressure a reporter or a news outlet to “scuttle” part of an interview. Doing so with a camera pointed at your head and a microphone clipped to your shirt makes it an even worse idea. Cosby has been in the business long enough to know the “every mic is hot” rule. I would assume the same to be true of his handler speaking on his behalf outside of camera range.

At one point, Cosby says he thought the question wouldn’t be asked because of the “integrity” of the AP. So he expected one of the nation’s last serious news gathering operations to ignore the biggest news hook in a Bill Cosby interview in favor of softballs? Good reporters ask tough questions. Reputable news outlets never promise to avoid certain subjects unless the circumstances are extraordinary and the agreement is disclosed to the audience. If you want those kinds of assurances, do a syndicated entertainment program or a late night talk show.

I don’t know whether Bill Cosby is a sexual predator, but he most certainly is a Media Disaster.