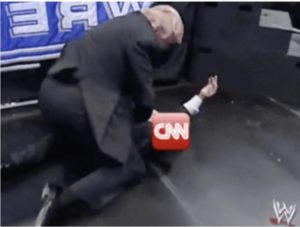 It’s a strange thing when the news media becomes the news.

But Donald Trump’s otherworldly tweet depicting him pummeling a CNN video effigy put that network at the center of a debate over what is responsible, what is dangerous, and what is presidential. I’ll leave the last category to the political pundits, but I have something to say about the first two.

In August of 2015, local TV reporter Alison Parker and her cameraman Adam Ward were fatally shot in the middle of a live report on local TV. The following year, journalists covering the U.S. presidential campaign reported assaults, threats, and an unprecedented atmosphere of intimidation, particularly from Donald Trump supporters. And just last month, a Montana congressman-elect pleaded guilty to assaulting a reporter whose only offense was to ask the candidate for his position on health care legislation.

So when the President of the United States tweeted a video of himself “beating up” CNN, it is easy to see why it touched a nerve.

I know it touched a nerve with me. As a former CNN reporter with friends still in journalism, I cringed when I saw that video (I won’t link to it, but you can find it on YouTube). There simply is no excuse for anybody, anytime, to advocate or trivialize violence against reporters. I would have found it just as objectionable if Barack Obama had tweeted a video of himself assaulting Fox News.

That said, what is it about CNN that Trump finds particularly egregious? After all, there was a time when CNN was practically beyond reproach. Ted Turner designed the channel to be so dedicated to serious journalism that his rallying cry was “The news is the star,” meaning that he didn’t want viewers to remember the names of anchors or shows, he wanted them to remember the stories. CNN employees were notoriously underpaid compared to their counterparts at other networks. The business card in our wallets was supposed to provide a kind of cash-equivalent prestige.

That’s how it used to be.

The network has unquestionably changed over the years. CNN still employs some serious, respected journalists who tend to get under the president’s rather thin skin. But, like other cable news channels, CNN has generally evolved from a news gathering model to a news analysis model. Today, opinionated talk show hosts have largely replaced news anchors. You are less likely to see objective reporters doing live shots from the front lines of breaking stories, and more likely to see panels of pundits speculating, spinning, and arguing over stories that might be 24 hours old. And if one (or more) of those panelists happens to be a critic of the president, Mr. Trump can claim that CNN is saying bad things about me.

The farther any news outlet wanders from newsgathering into opinion, the more it exposes itself to allegations of bias and favoritism.  This must have been a calculated risk for CNN, which has been enjoying high ratings for its panel/opinion format. And then there was the well-publicized resignation of three CNN journalists over a retracted story on the Trump administration and Russia (Trump’s disdain for CNN predated that incident, but was exacerbated by it).

I’m certainly not suggesting that CNN got what it deserved with the president’s wrestling tweet. But I do believe that the CNN of old would not have been such an easy target.

At the end of the day, hating any particular news outlet is a failed strategy, and alienating a powerful one is particularly ill advised. Media training helps communicators harness the power of the traditional media to achieve our messaging objectives. With the right approach, it is possible to win the match without ever stepping into the ring.