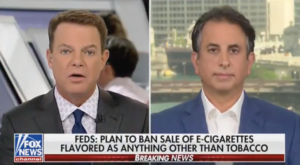 This one is Brutal.

We use a clip in our media training, in which Fox News host Shepard Smith attacks a hospital HR rep over a policy forbidding employees to smoke, even in their own homes. Smith invokes the slippery slope argument, demanding to know why the hospital doesn’t also limit employees’ alcohol, fat, and salt intake.

So it struck me as ironic to see the same host disembowel a vaping industry lobbyist over the potential dangers of electronic cigarettes.

Love him or hate him, you have to give Shepard Smith credit for one thing: being prepared (thanks in part to producers, writers, and his “Google Machine”). Fully anticipating the interviewee’s message points, Smith is ready with armor-piercing objections in a rapid-fire delivery that’s nothing short of an assault.

Is it pretty? No.
Strangely compelling? Somehow, yes.
Journalism? I’ll let you decide.

Whether you admire Smith or sympathize with his guest/victim probably depends on your feelings toward (a) Fox News Channel and (b) the “talk-radio-as-news” format that now dominates cable.

But wherever you land, file this one away as a cautionary tale. Because even if you represent a product or industry nowhere near as controversial as vaping, remember that good reporters can often see through the smoke.