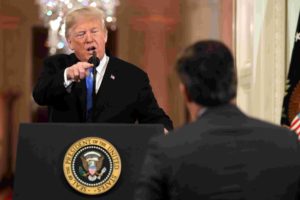 An arrogant, bullying, anti free press president attacked a working journalist this week and took away his press privileges because he didn’t like the reporter’s questions.

In related news, a showboating, biased, obnoxious reporter overstepped his role, disrespected the office of the president, and was justifiably suspended from the White House.

As with so many news stories, your tendency to believe one version or the other likely depends on your predispositions.

In case you managed to miss the pro wrestling event in question, take a look at what happened when the president’s favorite media nemesis, CNN’s Jim Acosta, confronted President Trump with questions about the migrant caravan making it’s way toward the US border.

I won’t critique the president’s behavior in this post. His disdain for the media and unconventional, unprecedented attacks on reporters speak for themselves. His claim that the media is the “enemy of the people” is personally offensive to me.

When a Reporter’s Gloves Come Off

Acosta’s opening remark about the caravan felt less like a question and more like an accusation, and then an argument. It’s okay for a reporter to say, “As you know, Mr. President this was not an invasion.” But this kind of “question” is more likely to provoke a dramatic defensive reaction than any kind of factual enlightenment.

Then there was Acosta’s tussle with the White House intern over the microphone (a mic which did not belong to CNN, but to the White House). Minutes later, Acosta reignited the drama by standing up to argue further with the president (unintelligible on the video) after Trump had called on another reporter.

My concern over Acosta’s behavior is not that it was unprofessional or disrespectful. But as an ex CNN journalist myself, I cringe when I see a reporter become part of the story.

I know, it’s hard for even the best journalist to cover a house fire objectively when it is his own home engulfed in flames. And judging by the behavior of the rest of the reporters at that news conference, it would appear that the White House press corps has come to the end of its patience with the administration’s constant attacks. They have run out of cheeks to turn.

The problem is that a reporter who takes the bait from this president risks credibility and makes it easier to be accused of partisanship. It doesn’t mean the media has to take this assault lying down. It means they have to be more tactical than ever and choose their battles carefully. These waters are uncharted and dangerous.

A Story With a Predictable Ending

Acosta, a veteran journalist, had to know his conduct would jeopardize his credentials to access a White House that wants him silenced. Without his press pass, Acosta has become story content, unable to effectively cover a president whose actions deserve as much scrutiny as the media can possibly provide.